The United Nations Millennium Campaign as Our Guide

At the 2000 Millennium Summit, world leaders from rich and poor countries committed themselves – at the highest political level – to a set of eight time-bound targets that when achieved will end extreme poverty by the year 2030.  The United Nations Millennium Campaign supports and inspires people from around the world to take action in support of the Millennium Development Goals.  Listed below are the eight goals and as you read through our web-site you will see how we are meeting these goals.

Universal Education:  Every human being should have the opportunity to make a better life for themselves.  Unfortunately, too many children in the world today grow up without this chance, because they are denied their basic right to attend primary school.  A sustainable end to world poverty as we know it, as well as the path to peace and security, requires that citizens in every country are empowered to make positive choices and provide for themselves and their families.

Environmental Sustainability:  Reducing poverty and achieving sustained development must be done in conjunction with a healthy planet.  The Millennium
Goals recognize that environmental sustainability is part of global economic and social well-being.  Unfortunately, exploitation of natural resources such as forest, land, water and fisheries—often by the powerful few-have caused alarming changes in our natural world in recent decades, often harming the most vulnerable people in the world who depend on natural resources for their livelihood.

Maternal Health:  Many people consider the day their child was born the happiest day in their life.   In the world’s wealthier countries, it is.  In poorer countries, the day a child is born is all too often the day its mother dies.  The lifetime risk of pregnancy and childbirth in Africa is 1 in 22 while it is 1 in 120 in Asia and 1 in 7,300 in developed countries.

Child Health:   One of the darkest characteristics of poverty is that is seems to prey on the vulnerable and defenseless.  In low-income countries, one out of every 10 children dies before the age of five.  In wealthier nations this number is only on out of 143.

Gender Equality:  Poverty has a woman’s face.  Global prosperity and peace will only be achieved once all the world’s people are empowered to
order their own lives and provide for themselves and their families. Societies where women are more equal stand a much greater chance of achieving the Millennium Goals by 2015. Every single goal is directly related to women’s rights and societies where women are not afforded equal rights as men can never achieve development in a sustainable manner.

Global Partnerships:  the Millennium Goals represent a global partnership for development.  The deal makes clear that it is the primary responsibility of poor
countries to work towards achieving the first seven goals. They must do their part to ensure great accountability to citizens and efficient us of resources.  But
for poor countries to achieve the first seven goals, it is absolutely critical that rich countries deliver on their end of the bargain with more and more
effective aid, more sustainable debt relief and fairer trade rules, well in advance of 2015.

HIV/AIDS:  Malaria, together with HIV/AIDS and TB, is one of the major public health challenges undermining development in the poorest countries in the world.  Malaria kills an African child every 30 seconds.  Many children who survive an episode of severe malaria may suffer from learning impairments or brain damage.  Pregnant women and their unborn children are also particularly vulnerable to malaria, which is a major cause of perinatal mortablity, low birth
weight and maternal anemia.

Poverty and Hunger:  Over the years, we’ve been inundated with the statistics and the pictures of poverty around the world-so much that many people in both the North and South have come to accept is as an unfortunate but unalterable state of affairs.  The truth; however is that things have changed in recent years.  The world today is more prosperous than it ever has been.  The technological advances we have seen in recent years have created encouraging new opportunities to improve economies and reduce hunger. 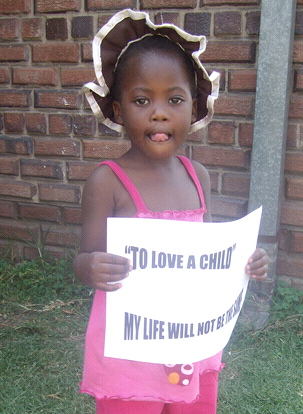